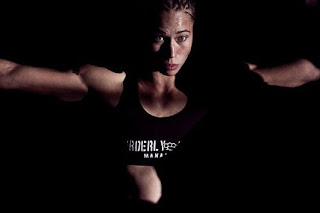 On Sept 24th at the The Orleans Hotel & Casino in Las Vegas, Tuff-N-Uff will be holding the final round of two women’s tournaments in the 125lb and 135lb divisions at their Future Stars event. Both tournaments started off on July 2nd with eight women in each division. Now down to two in each division, fighting out of Virginia will be 26 year old Ashley Weakley.
Ashley has been a competitive athlete her whole life in multiple sports including gymnastics, softball, Olympic weightlifting and boxing.Ashley is also proficient in acrobatics and weapons training, including being a full instructor in Kali a Filipino martial art that teaches stick and knife combat. She was also a student of Jeet Kune Do the martial art founded by Bruce Lee.
When Ashley was asked why she was given the nickname "Baby Tyger" by her friends she replied, "Because just like a baby tiger, I don't look mean but the moment you underestimate me, I will attack you."

Ashley began training in Women’s Mixed Martial Arts nine months ago at L.A. boxing in Chantilly, Virginia where she trains full time for MMA with an elite staff of coaches including Leo Dalla for BJJ, Dino Phillips for strength and conditioning and Dave Reeves for MMA.

She has an undefeated record of 4-0 heading into the Tuff -N- Uff 135lb. Championship Title Fight on September 24. She is 5'8 and her walk around weight is 145. Even though she only cuts 10lbs don't expect to see her fight at 125lbs, because she feels 135lbs is where she is strongest.


The road to the finals of the Tuff-N-Uff 135lbs tournament began with a unanimous decision victory in the opening round of the tournament over Emily Kagan on July 2nd. Then on August 6th at the semi-finals of the tournament Ashley defeated Jillian Lybarger with a very impressive darce choke.
As the finals draw near and T.J Cunnaan awaits Ashley did mention she has watched T.J's fights at home but was not willing to talk about her strategy going into the fight but did say that the after party that she will be hosting at "De Ja Vue" Erotic Lounge will in fact be a victory party.
Future, plans for Ashley include pursuing a full time career in acting and stunt work. She is confident that her experience and the publicity from competing in Women’s MMA will open up opportunities for her to achieve her future goals, while still allowing her to chase her dream of dominating the 135lb professional weight class, which she hopes to join in the beginning of 2011 and in her words "Hopefully Ill be fighting for the Strikeforce 135lbs title by the end of 2011.
Ashley is managed by "Train" from Disorderly Conduct Management.
Her sponsors include Fightergirls, L.A. Boxing in Chantilly, Virginia, The Gun Store Las Vegas
Her website: Ashleyweakley.com